Sumer (also known as Sumeria) was responsible for the earliest art of Antiquity. The Sumerians were the first civilizing people to settle in the lands of southern Mesopotamia, draining the marshes for agriculture, starting trade, and establishing new forms of ancient pottery (first mass-produced bowls made at Uruk, about 4000 BCE), along with crafts like weaving, leatherwork and metalwork. In a nutshell, up until about 3500 BCE, Sumerian art only really excelled at pottery – albeit of a type and quality which was far superior to any form of Greek pottery produced up to that point. Thereafter, we see the emergence of free standing sculpture, along with early bronze statuettes, primitive types of personal jewellery and decorative designs on a wide range of artifacts.

Sumeria was an aggregate of at least 12 city-states on the Euphrates, close to the Persian Gulf, each ruled by a King. They included: Adab, Akshak, Bad-Tibira, Erech, Kish, Lagash, Larak, Larsa, Nippur, Sippar, Umma, Uruk and Ur.It is possible that they came from the Iranian Plateau to the east, bringing these achievements with them from some still undiscovered Persian or Scythian birthplace of culture. In other words, Sumerian culture – which previously had been considered to be on a par with late Prehistoric art – is now known to have possessed many of the cultural attributes commonly associated with later Egyptian civilization, among others. Sumerian culture flourished during the 4th and 3rd millennia BCE, before being overrun by the Semitic-speaking kings of the Akkadian Empire around 2270 BCE. 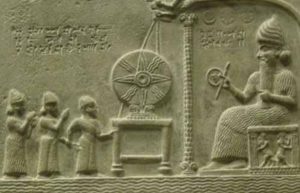