Fashion photography is a genre of photography which is devoted to displaying clothing and other fashion items. It is most often conducted for advertisements or fashion magazines such as Vogue, Vanity Fair, or Elle, and has developed its own aesthetic in which the clothes and fashions are enhanced by the presence of exotic locations or accessories. In the first decade of the 20th century, advances in halftone printing allowed fashion photographs to be used in magazines. In the recent years’ fashion photography gained an even greater popularity due to the expansion of internet and ecommerce. Read more.>> 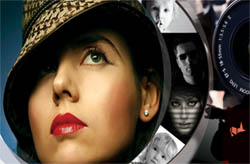