El Greco, byname of Doménikos Theotokópoulos, (born 1541, Candia [Iráklion], Crete—died April 7, 1614, Toledo, Spain), master of Spanish painting, whose highly individual dramatic and expressionistic style met with the puzzlement of his contemporaries but gained newfound appreciation in the 20th century. He also worked as a sculptor and as an architect.

El Greco never forgot that he was of Greek descent and usually signed his paintings in Greek letters with his full name, Doménikos Theotokópoulos. He first appeared in Spain in the spring of 1577, initially at Madrid, later in Toledo.

On the other hand, to the modern eye El Greco’s daring use of colour is particularly appealing. The brushwork remains Venetian in the way that the colour suggests form and in the free illusionistic and atmospheric creation of space. He chose a method of space elimination that is common to middle and late 16th-century Italian painters known as Mannerists, and at the same time he probably recalled late Byzantine paintings in which the superposition of heads row upon row is employed to suggest a crowd.

Although Greek by descent and Italian by artistic preparation, the artist became so immersed in the religious environment of Spain that he became the most vital visual representative of Spanish mysticism. Yet, because of the combination of these three cultures, he developed into an artist so individual that he belongs to no conventional school but is a lonely genius of unprecedented emotional power and imagination. 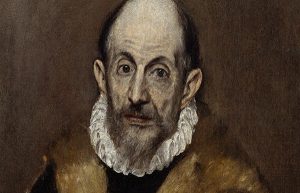 Lotus Educational Institute, proudly would like to announce the “Virtual Training Service“ for all current and new students with the main advantages as follow: