Chinese calligraphy is a type of pleasing writing, as well as a kind of sport, embodying the artistic expression of human language in a tangible form. Distinguishing features of Chinese painting and calligraphy include an emphasis on motion charged with dynamic life.

Calligraphy has also led to the development of many forms of art in China, including seal carving, ornate paperweights, and inkstones. Each archaic kingdom of current China continued to revise its set of characters. 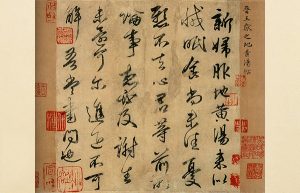